Appearance: 1/16 – 1/4 inch long with a reddish brown color and a darker abdomen

Habitat & Behavior: Accidentally introduced into the United States from Brazil in the 1930’s, the Red Imported Fire Ant has spread to most of the American southeast. The fire ant is very aggressive and will sting repeatedly, especially when their nest is disturbed. Fire ants usually nest outdoors in sunny areas, i.e. lawns, gardens, flower beds, etc. If left untreated, infestations may reach 30-100 mounds per acre, containing 80,000 ants.

Control: Treating each mound individually as well as a broadcast treatment of the surrounding area is needed. Knockdown may take several weeks, so early-season application is recommended. 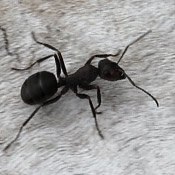 Appearance: 1/8 inch long with a solid brown to black color

Habitat and Behavior: Odorous house ant colonies may contain up to
100,000 ants and usually nest in wall voids, most often around hot- water pipes and heaters, and in cracks and crevices around sinks and cupboards. Outdoors their nests came be found under in soil, often under objects. During cases of flood or drought, or when colonies become too large, these ants are more likely to enter buildings.

Diet: Indoors these ants prefer sweets during the warm months, but can also feed on high-protein foods such as meat or cheese. Outdoors they mainly feed on plant secretions, honeydew, and sometimes other insects and seeds.

Control: Locating the nest is key in controlling these ants. A combination of baits and sprays is most effective in eliminating these ants from your home by treating wall voids and cracks and crevices in and around infested areas. 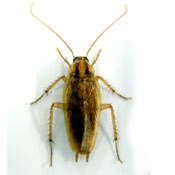 Habitat and Behavior: German cockroaches are one of the most common household pests found in the world. They are very resilient and boast a very short period between birth and sexual maturity. They are mainly found around human habitats such as homes, hotels, food processing plants, restaurants. German cockroaches can literally make you sick as they have been found to carry the pathogens that lead to several diseases as well as bacteria and viruses.

Diet: Although they prefer sugar, starchy foods, meat or grease, these roaches are omnivorous and also may scavenge on whatever they can find if the need arises.

Control: Treating the infested area with a mixture of baits and sprays is most effective. Baits are especially recommended since German cockroaches are known to hide in hard to reach areas where normal sprays may be ineffective. 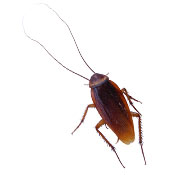 Appearance: May grow up to 1 1/2 inches and are reddish brown with yellow behind the head

Habitat and Behavior: They prefer moist areas and are often found in sewers and basements of buildings. They generally do not infest in homes and buildings due to their larger size and slow development. They have been known to fly during the mating season.

Diet: American cockroaches are scavengers that mainly feed on decaying organic matter as well as many other types of food .

Control: More easily controlled with insecticide sprays due to their larger size. Treating cracks and crevices around areas where they have been seen is effective.

Appearance: The mature female is around 1.5 in and 0.25 in diameter.
Females are usually shiny black in color with the distinctive hour glass marking on the abdomen. Males are either black or grayish white and much smaller in size.

Habitat and Behavior: Black widow webs are often found near the ground and can be recognized by their erratic shape. They can be found around the home in drainage pipes, weep holes, or in stacks of bricks.

Their neurotoxic bite can be very painful to humans and animals, although rarely fatal.

Diet: Black widow spiders prey on a variety of insects, including other spiders.

Control: Treating the exterior of areas where black widows have been seen such as homes, buildings, garages, or jungle jims, with a liquid pesticide will give you a long residual and offer the “knockdown” that you need. 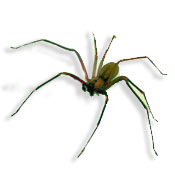 Appearance: Usually 1/4 – 3/4 inches in length and may be brown, gray, or deep yellow. Due to their markings and shape, they have also been given the nicknames, “fiddleback spider”, “brown fiddler”, or “violin spider”.

Habitat and Behavior: They can be found building irregular shaped webs in woodpiles, garages, sheds, closets, beds and other places that are usually dry and undisturbed. Shoes and infrequently used beds are often when they are encountered by humans and may bite if they feel threatened.

Control: Treating common areas with a residual product will be effective. To reduce the chances of a bite, be sure to shake out and inspect clothing or sheets that haven’t been used recently.

Appearance: 3/4 – 1 inch in length, can be black/yellow, or dark red in color

Habitat and Behavior: Paper wasp hives can usually be found underneath eaves, in bushes, or backyard jungle jims. They gather fibers from dead wood or plant stems, which they mix with saliva to create their nests. They will only attack if they feel the nest is threatened and can generate a very painful sting, which has been known to produce a fatal anaphylactic shock in some individuals.

Diet: Paper wasps feed on nectar and other insects and are sometimes considered beneficial by gardeners.

Control: Approaching the nest while wasps are present is not recommended. Contact a professional who will knockdown the wasps and then remove the nest to prevent the wasps from returning.