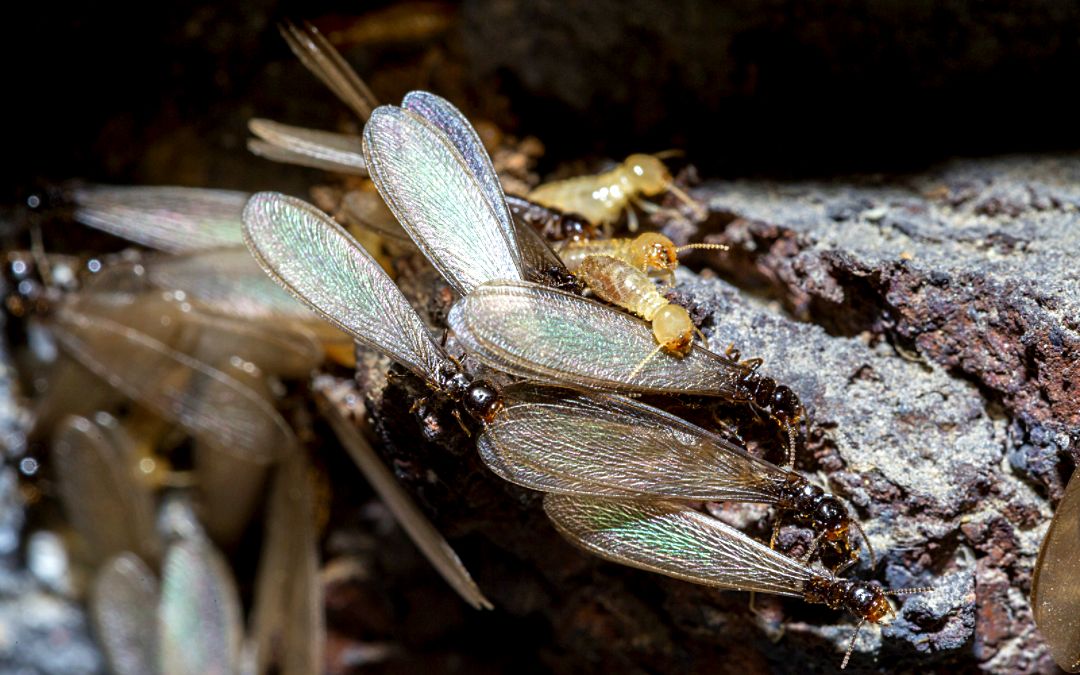 Many homeowners believe that termite swarms will damage their property, but that’s not exactly true.

However, they don’t cause this damage while swarming. Swarming is simply a part of the regular termite life cycle.

If you see swarming termites, though, it’s normal to be concerned. A swarm of termites points to a nearby colony that could be damaging to your home.

Termites have a destructive appetite for wood, making them a dangerous nuisance. 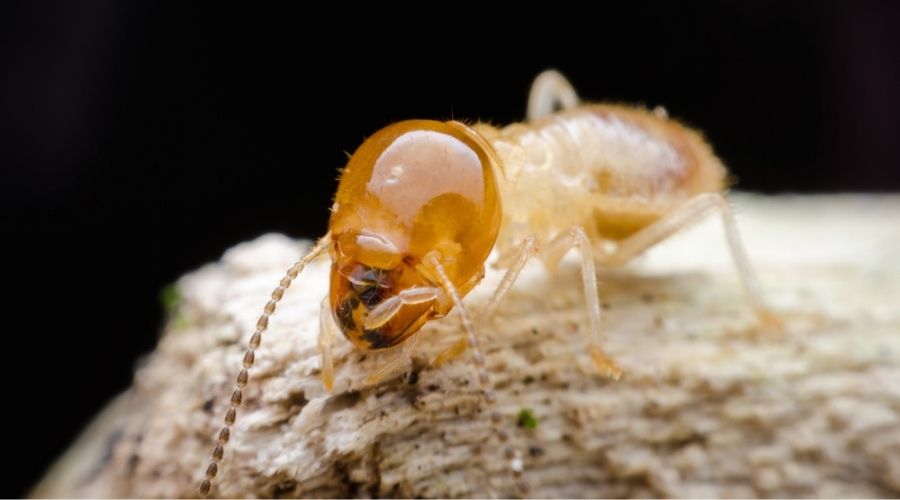 Dampwood termites are large compared to other common termite types. As their name implies, they live in damp and often decaying wood.

They thrive on moisture and do best in high humidity environments, such as the Pacific coast. Though their colonies are typically small, they can grow to substantial sizes in the right environment.

Unless your home’s wood has a significant moisture content, dampwood termites probably aren’t a cause for concern. More home and property owners have problems with dry-wood or subterranean termites. 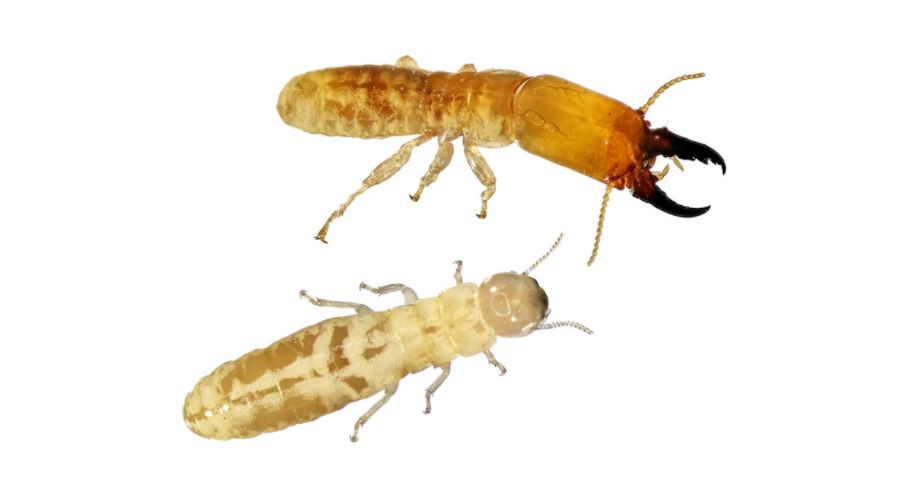 Drywood termites require far less moisture than their dampwood counterparts. Still, they also prefer to nest in wood rather than soil.

Drywood termites can cause significant structural damage to homes and buildings. Their colonies usually consist of a few thousand termites. 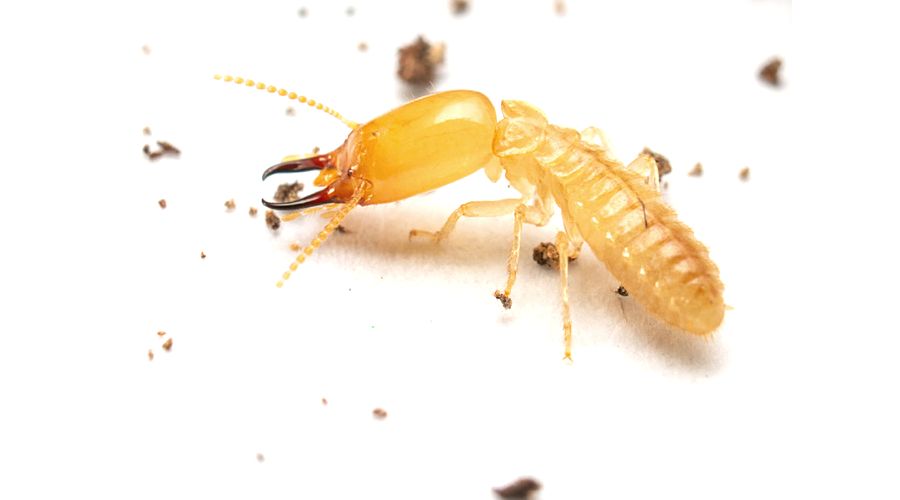 Subterranean termites are the most destructive to homes and other wood structures. That’s because they usually have large underground colonies to support.

Subterranean termites don’t nest in wood like other types. Instead, they build their homes in the soil. Then they use mud tubes to travel from their nest to wood-based food sources.

Usually, these mud tubes are visible around the foundation of your home. If you see them, you know you have a termite problem.

To understand when termites swarm and why it helps to know a bit about the termite life cycle. 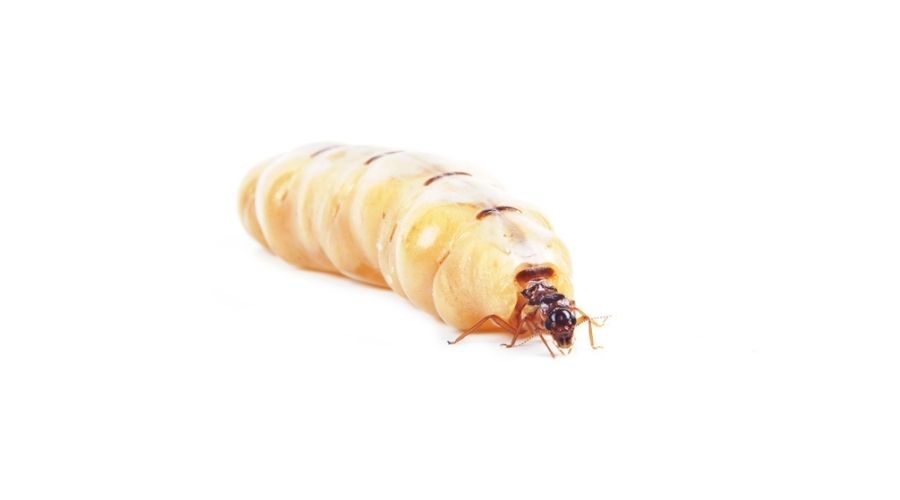 Termite colonies begin with the queen. Queens are large and often pale, yellow-brown. They spend their days laying eggs, usually several thousand throughout their lives.

The eggs hatch as nymphs and then go through a series of molts until they become one of the four adult termite types. 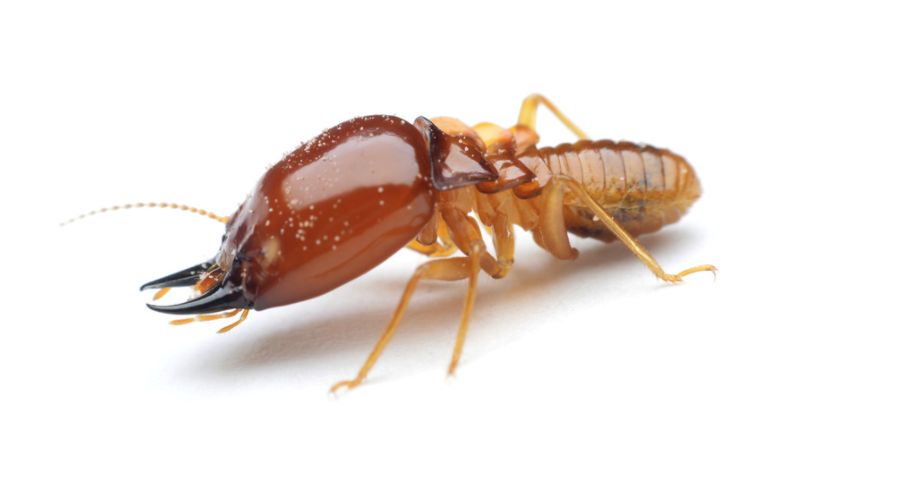 Worker termites are white or even transparent. They gather food and care for termite eggs and nymphs.

Subterranean worker termites also build the mud tubes that attach the colony’s nest to its nearby food source. 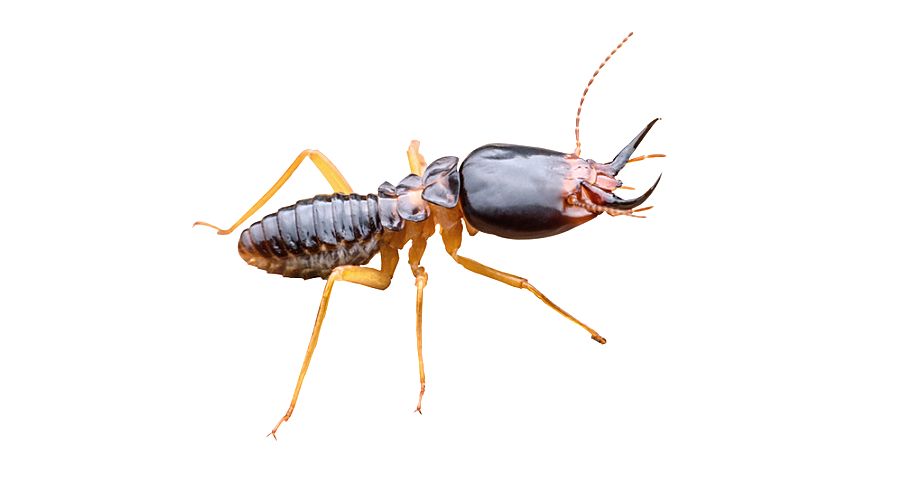 Soldier termites are large and often dark-colored, either brown or black. They have massive mandibles that they use to crush potential nest or tube invaders. 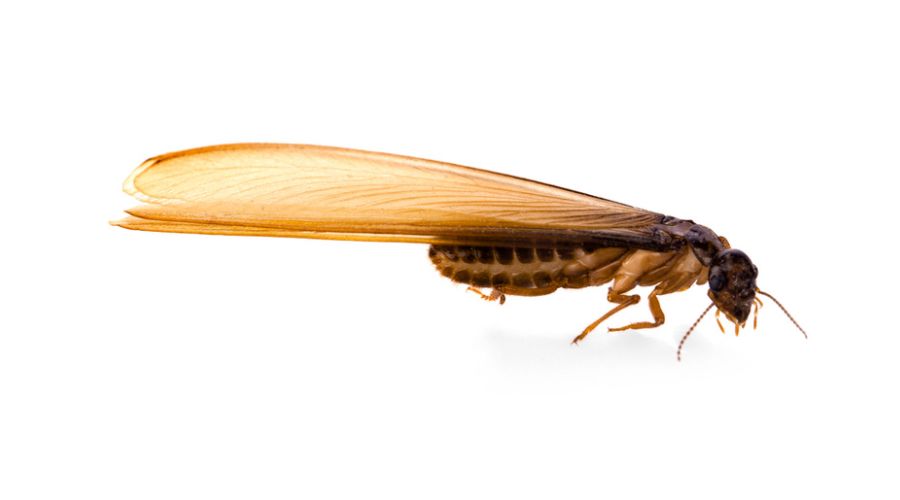 The primary and supplementary reproductive termites are responsible for mating, laying eggs, and developing termite swarms. Initially, the queen does the egg-laying, but as she matures, she produces supplemental egg producers.

When that time comes, these reproductive termites gain wings, after which they swarm, mate, and find new homes.

All About Termite Swarms

Alates, or winged reproductive termites, are responsible for the concerning swarms homeowners sometimes see, but what is a termite swarm, exactly? And why and when do they occur?

What Is a Termite Swarm?

Only the winged reproductive termites can create a termite swarm. They do this when their colony size and local weather align, making it possible for a swarm to form.

Under the right conditions, the alates begin to emerge. Then, they’ll take to the air and form mating pairs.

Homeowners will usually spot subterranean termite swarmers near windows or light fixtures. That’s because these structure-eating pests are attracted to light.

The swarms can last a few days or up to a few weeks. When they start and when they finish depends on the colony and local weather conditions.

Why Do Termites Swarm? 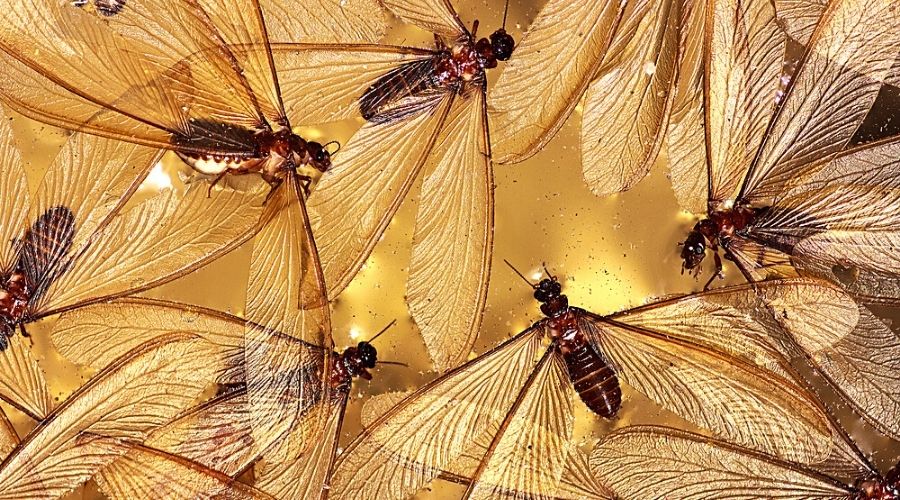 Termites swarm to establish new colonies, which means they only swarm when their former colony has reached a significant size. The weather conditions must also be appropriate to facilitate swarming. For most species, this happens once per year.

When the conditions are right, swarmers take off from their nests and pair up, one male to one female. Each pair may only be in the air for a few seconds, but the swarm as a whole will usually continue for several days or a few weeks.

After they swarm and pair, couples shed their wings, mate, and find a nesting place where they’ll establish a new colony.

The number of swarmers will vary significantly based on the colony size and the termite subgroup. If there are multiple colonies in an area, they’ll likely swarm simultaneously. The different colonies may also exchange alates.

When Do Termites Swarm?

Termites swarm at different times depending on their subgroup and the location of their nest. Usually, this is during or just after the rainy season ends (in spring or summer) when there’s minimal wind. Warm and humid weather is ideal for termite swarmers.

Below, you’ll find the swarming times for common termite subgroups:

Getting Rid of Termite Swarms

Termites don’t damage structures while they swarm, but their presence indicates a well-established colony nearby. In other words, if you see a termite swarm near your home, you could have a full-blown termite infestation.

Thankfully, there are steps you can take to prevent swarms, infestations, and the subsequent damage they cause.

How Long Do Termites Swarm After Treatment? 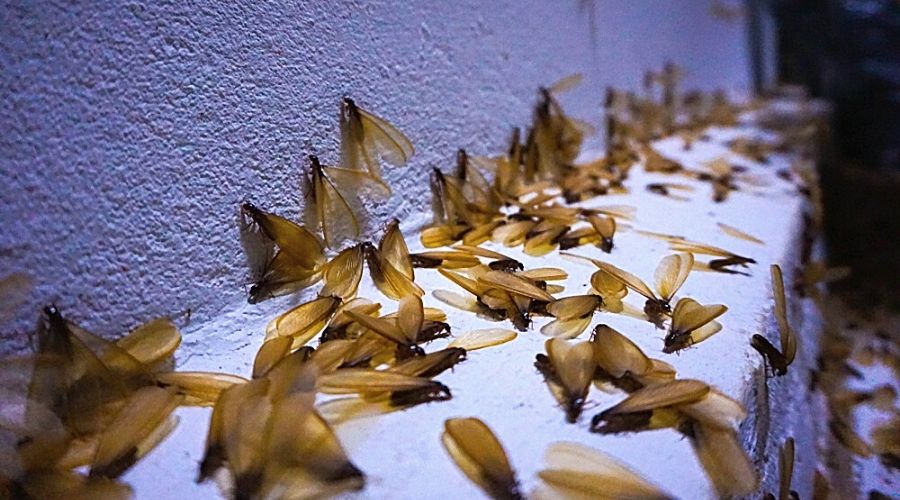 Sometimes, even after treatment, termites will swarm. Termite treatments vary in their effectiveness depending on the products and application methods. And, it may take several weeks for a termite treatment to eliminate a colony.

Most treatments target the moisture levels in the wood of your home or building. Lower moisture content leads to termite dehydration and then death. In other words, treatments can’t provide an instant end to termites. They take a little time.

Alates are resilient to typical termite treatments and are often the last to die in a colony. It’s not uncommon for them to continue swarming for up to a month after treatment.

Seeing a swarm after treating your home doesn’t mean the treatment didn’t work. It just means the alates are still hanging on. The wood within your home, though, will no longer provide a suitable food source, and you shouldn’t have to worry about re-infestation.

If you see a swarm and haven’t had your home treated yet, it’s time to call a professional. Termites, especially subterranean termites, can cause massive amounts of damage faster than you might expect. Catching them early is key to mitigating damage.

If you see a termite swarm, mud tunnel, or any sign of termite damage, you need to act fast!

Our pest control experts will perform a thorough termite inspection. Then, they’ll use effective treatments that target termites in each life stage.

These treatments give you back your peace of mind. You won’t have to worry about termites eating your home from the inside out, and swarms will be less of a concern. Even if you don’t see a swarm or other sign of direct damage, regular termite inspections are crucial to avoid irreparable damage to your home.

So, call and schedule your pest inspection with Stampede Pest Control today! With over ten years of experience, our highly-trained technicians prevent and get rid of termites with ease.