How Many Babies Do Mice Have? The Answer Might Surprise You 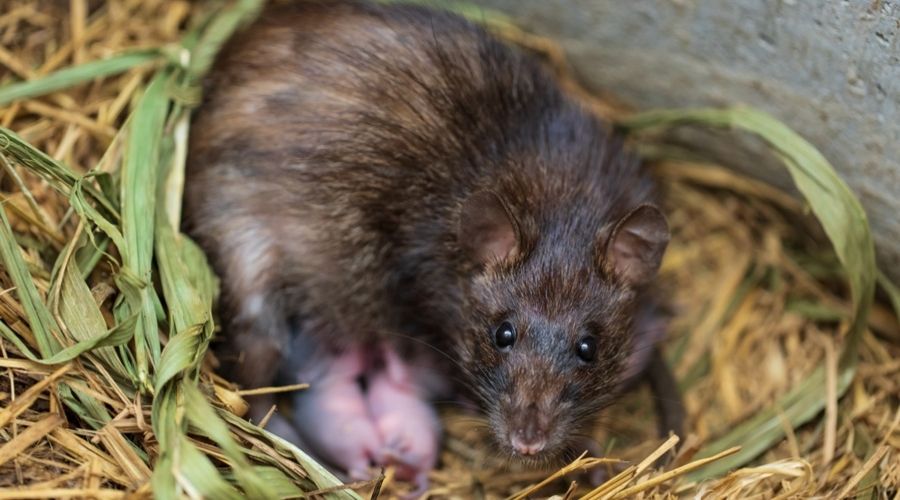 Mice are among the fastest-breeding mid-size pests when circumstances permit. Here’s what you should know about how fast they breed and what you can do about it.

Fact Check: How Many Babies Can Mice Have At One Time?

A female mouse can have anywhere from 3-14 babies (often called “pups”) at a time, though most litters fall in the 6-8 range.

Since mice can have babies as many as ten times per year, this means a single mother could produce about 70 offspring all by herself. With sufficient food and safety, a colony of mice can explode to become a huge problem faster than most people would believe possible, undermining sanitation and spreading out to nearby homes or businesses.

In practice, most colonies are somewhat limited by the environment, but even a few pups can quickly become a serious mouse infestation.

The Truth About Mice: Growth and Reproduction

Here are some quick facts about mice.

When does mating for mice begin?

Mice reach sexual maturity at 6-8 weeks old. This is true for both males and females, and they’re ready to start having babies at that point.

How fast do mice reproduce/give birth?

Female house mice give birth in about 21 days, although this can drop as low as 19 depending on factors like food and access to water. Easier access to a food source always makes it easier for mice to have children.

How long do mice live?

Mice lifespans vary greatly depending on their environment. With easy access to nesting materials, food, and water, mice may live up to two years. Wild mice in less-than-ideal environments will probably live closer to 6-12 months, which is still enough time to have several litters.

Their period of estrus is every four to five days

Mice are extremely sexually active, with frequent periods of estrus that allow them to maximize the number of children they can give birth to.

How often can “mother mouse” be pregnant in a year?

Assuming that the mother mouse lives long enough, they can be pregnant up to 10 times in a year. Most mothers take at least a few days to rest before they start having their next litter.

How many baby mice can a female mouse produce?

Female mice produce a very different number of babies depending on their environment. On the small end, limited food may result in very small litters, so a mother who lives to about six months may only have twelve children in total.

On the high end, a mother who lives for about a year and has ten litters may produce as many as a hundred and forty children. Having that many is quite unusual, but it can happen. As we mentioned above, though, most mice won’t breed at quite the theoretically optimal rate.

All About Baby Mice 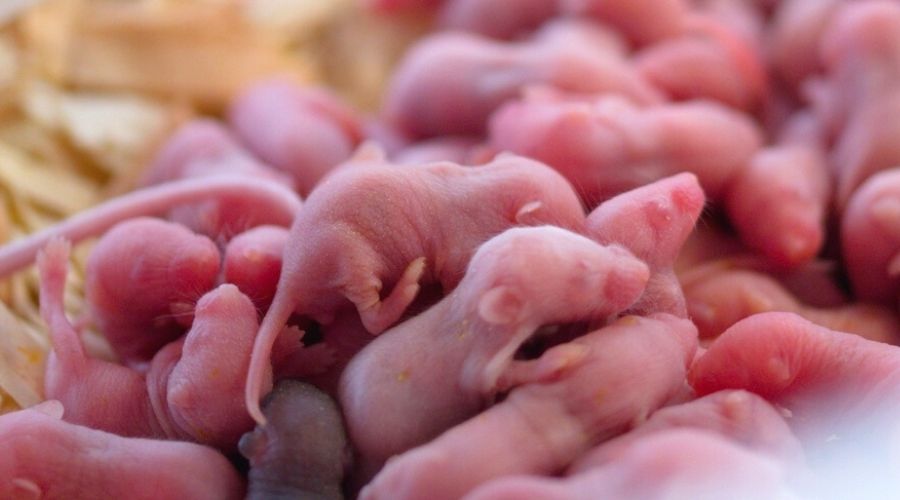 Baby mice are usually tiny and pink. They’re born blind and hairless, so they need additional nursing from their mother before they’re ready to start moving around. They are highly dependent on their mother and her milk, so removing the mother will generally eliminate all newborns as well.

Juvenile mice will open their eyes and finish growing their hair around the time they’re two weeks old, at which point they’ll start leaving the nest to find their own food.

Most mice finish maturing in another 2-4 weeks, at which point they’ll look for mates and start breeding.

Even after getting grown, most mice aren’t dangerous on their own. They don’t have nasty claws or aggressive biting habits (unless you pick them up). However, they often carry diseases that pass from parent to child, and that’s where the real danger lies.

An exploding population of mice, with several new mothers reaching maturity every few weeks, can spread dozens or hundreds of disease-carrying children across an increasingly wide area that people inhabit. Additionally, many of them carry fleas that bite humans and spread diseases further.

Only an expert can determine if you have a true infestation, but there are a few common signs that can tip you off.

Locating mice droppings is usually the best indicator because that means they’ve found food in the area. If you hear any scratching or squeaking sounds in the walls, they could be hiding there as well. Strange foul smells can occur from urine or feces, or decomposing bodies.

Finally, gnawed food packaging and wires are a strong indicator of mouse activity. Don’t underestimate this as a threat, either. The Illinois Department of Public Health estimates that as many as 25% of fires from unknown causes are started by rodents gnawing on gas lines, electrical wires, and matches. 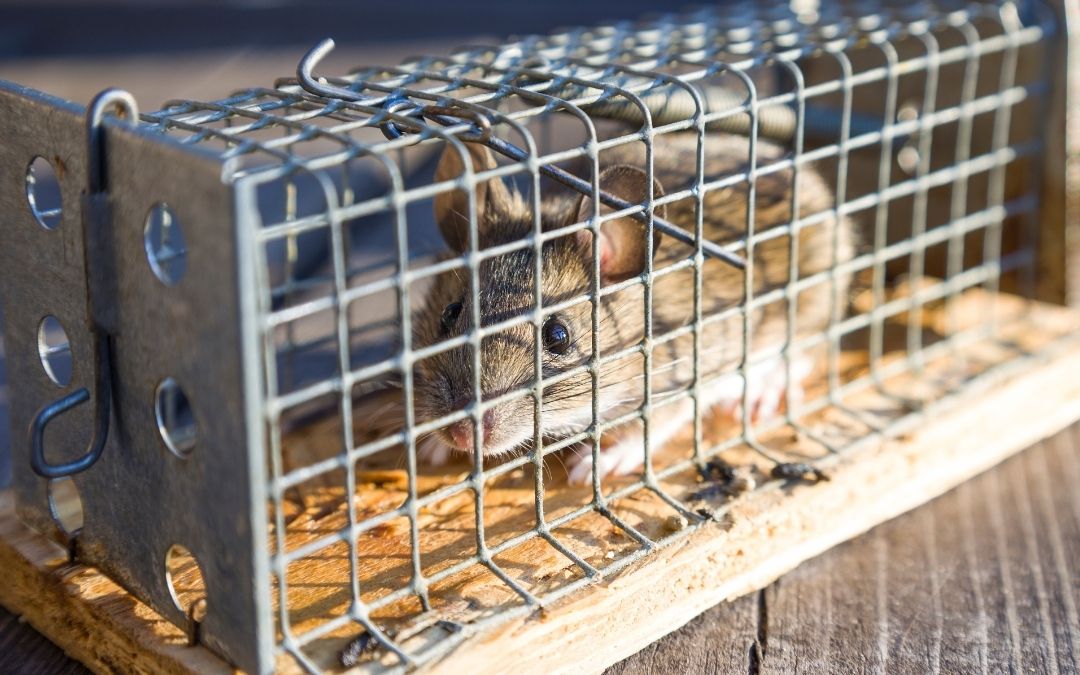 While we always suggest contacting the experts, there are a few things you can try before doing that. These are most effective if mice are only sniffing around the area and haven’t built a proper colony yet.

The best way to drive off baby mice and juveniles is through smell. Dryer sheets, mothballs, and cotton soaked in either pure peppermint or clove oil are all useful for driving mice away.

Mice have an extremely good sense of smell, so if an area smells threatening when they first visit it, they’re more likely to turn around and go the other way. They may risk moving forward if they’re exceptionally hungry, but as risk-averse creatures, they’re reluctant to engage with simple, non-toxic remedies.

Bait and traps are another effective way to get rid of mice. Traps are preferred since chemical baits can have unintended consequences like poisoning pets and other wildlife that might eat the poisoned rodent.

Similarly, try to keep areas like the basement, garage, and exterior free from mouse-attracting materials.

Sealing cracks and crevices are also useful for keeping mice infestations at bay. Make sure to check in the walls, around pipes and wires, and anywhere else that mice might be able to squeeze through. They can get through extremely small holes, so it’s better to seal any hole up instead of leaving it to chance.

Different areas require different sealing materials. Consult with a professional to figure out what’s best for your home or business.

For holes in walls inside of a house, plaster is often a good choice. Some areas may need special care, such as colored sealers that can blend in with wood.

Remember that just sealing holes won’t necessarily stop a house mouse. That’s just one of several steps, and chances are you’ll also need to use some of the other strategies listed above.

If the tips above don’t work, call a professional for a much more efficient and effective approach.

Stop Them Before It’s Too Late

If you’re having problems with living or dead mice, don’t wait until their population explodes. Call Stampede Pest Control today. We offer prompt, affordable service with guaranteed effectiveness, and we’ll gladly give you a free quote on our services.

Be sure to mention any signs of other pests when you call. Special rates may be available for addressing multiple pests.